Sanitaryware producers traditionally use single-use tiles or ‘plates’ during the firing process to avoid the deformation and defects of ceramic toilets.

ShrinkSan® is a patented solution which has been designed to substitute these disposable plates with a sustainable system which is reusable more than 800 times.

In a traditional firing process, sanitaryware pieces are placed on kiln furniture before firing. The extreme heat causes the pieces to shrink, creating friction between the piece and the kiln furniture. This friction sometimes generates defects in the glaze or shape of the foot.

To reduce these defects, single use tiles are placed between the piece and the kiln furniture. While this solution has proven effective, its environmental impact is questionable, since these single-use tiles are subsequently discarded generating waste.

To address this issue, Imerys has developed ShrinkSan®, a patented kiln furniture system capable of managing piece contraction during firing while remaining reusable and therefore sustainable.

ShrinkSan® kiln furniture can be used more than 800 times, allowing sanitaryware producers to reduce the amount of waste they generate significantly.

After firing, the system can be easily reset by positioning a new organic spacer between the mobile elements. The system is then ready to be used again.

ShrinkSan® absorbs over 75% of the firing shrinkage reducing friction of the sanitaryware pieces on the kiln furniture supports, hence decreasing the number of rejects.

ShrinkSan® is a sustainable alternative to single-use ceramic plates used during the firing of sanitaryware pieces:

ShrinkSan® can be used more than 800 times allowing sanitaryware producers to significantly reduce the amount of waste generated (about 3 tons of waste for 1,000 toilet pieces, which represents about 15% of the weight of one piece).

ShrinkSan® is a Pioneer product 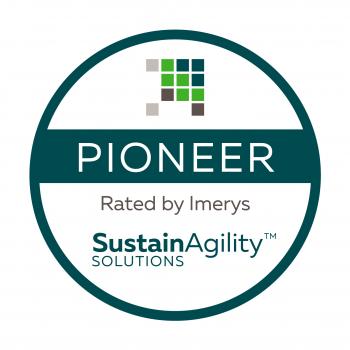 Our recently introduced Pioneer certificate denotes a product that provides the highest social and environmental contribution to the downstream value chain, whilst demonstrating a low environmental impact in its production phase compared to its economic value.

More about our SustainAgility program.

We are able to provide customized solutions to meet your specific kiln furniture requirements.

Please contact us, we will be only too happy to help

Have you checked our Download Center which contains most of our Regulatory documents?

If your enquiry concerns a specific MARKET, please contact a Market Expert or contact a Salesman for that market .

If you require DOCUMENTATION, please check our Download Center which contains:

Are you sure you want to delete your account details ?

For copyright reasons, this document is not directly downloadable.

It will be sent to your email address as quickly as possible.